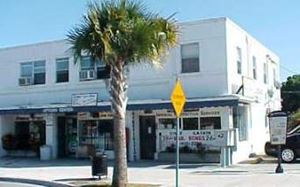 At a time in Florida's history when there were few publications for African Americans, and newspapers had little interest in covering African American community news, publisher C.E. Bolen introduced The Chronicle, a weekly newspaper written by and for African Americans, originally billed as the "Ambassador of Good Will," and in later years, "Bringing You the Very Best in Black News Coverage." The Chronicle appeared every Thursday until it ceased publication in 1992. The paper was put together and printed in this building, starting in 1957.

Bolen recruited Zora to write for him and persuaded her to move to Fort Pierce, and thus at the age of 65, she began yet another new career as a regular journalist for The Chronicle. In Brevard County, where she had been living, she had worked briefly as a librarian but was unable to find suitable permanent employment.

Throughout her life, Zora wrote articles for many national magazines and newspapers. However, she had never worked as a regular reporter, so her move to Fort Pierce to work for The Chronicle represented yet another fork in her life's road. Zora's articles, which ran from 1957-1959, included stories on community concerns, race relations, hoodoo, black magic, and local features. 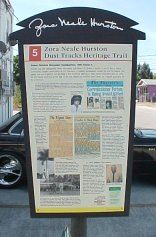 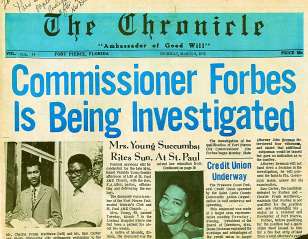 Zora was able to draw on her fascinating work history for many entertaining stories. Few original copies of The Chronicle remain, however reproductions of some of Zora's articles, like this one (part of her Hoodoo series), are available for reading at the Zora Neale Hurston Branch Library located at 3008 Avenue D. In her book, "Mules and Men", Zora said that "voodoo" was the way whites pronounced "hoodoo," a system of beliefs in magic that originated in Africa and spread around the world.

Zora and the Study of Hoodoo

"I have landed here in the kingdom of Marie Laveau and expect to wear her crown someday - Conjure Queen as you suggested." So starts a letter from Zora to famous African American poet and writer, Langston Hughes, in 1928. Zora spent months in New Orleans and other parts of Louisiana researching the life and work of Laveau, who had been the most powerful voodoo priestess in the world in the 1800s and self-proclaimed "Pope of Voodoo." Zora was in fact "crowned" by a grandnephew of Laveau's after an initiation rite that required her to lie face down and naked, without food or water, for nearly three days (Zora Neale Hurston, a Life in Letters, collected and edited by Carla Kaplan, 2002)" 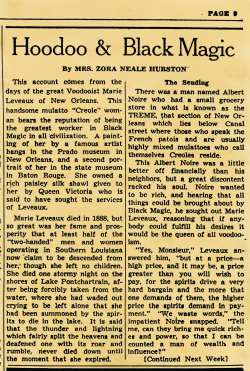 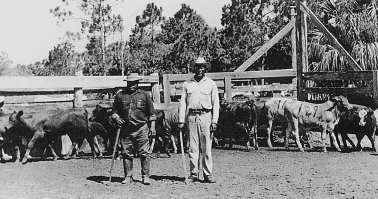 Cowboy Eddie, at left, and ranchhand Homer Cummings. When he returned from College in Gainesville, Ralph Sexton (Sean's father) took over the ranch and Eddie began taking care of the cattle and building many of the fences that stand today.

Zora was interested in researching and writing about various aspects of Florida's cultural history, including cattle ranching and life along the Indian River. For The Chronicle, she wrote "The Tripson Story," published February 6, 1959, where she described the skills and importance of Cowboy Eddie Darrisaw, right-hand man at the Tripson Dairy and the Sexton family's Treasure Hammock Ranch, both in Vero Beach.

Publisher C.E. Bolen, owner of The Chronicle, a native Floridian and graduate of Florida A&M University, died in 1994. His love of journalism started with a stint on his high school student paper and again on Florida A&M University's college paper, The Famcean. He also served 13 years at Lincoln Park Academy (Heritage Trail Marker #2) as teacher, coach, athletic director and, of course, supervisor of the school newspaper.

According to a February 14, 1990 Fort Pierce Tribune article, C.E. Bolen had this to say about his experience with Zora: "I found Zora in Cocoa, where she was doing some writing for the Pittsburgh Courier, I think. I said 'Why don't you come to Fort Pierce and work for me?' and she did... She amazed me. You could learn a lot from talking to her... She carried a lot of good information with her to her grave." 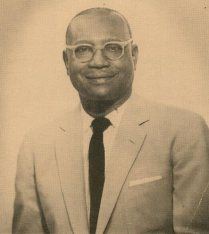